Calligraphy is an integral part of the stunning Taj Mahal and compliments other elements of the structure. It mainly consists of the verses and passages from the holy book of Quran.
Taj Mahal: Taj Mahal Calligraphy 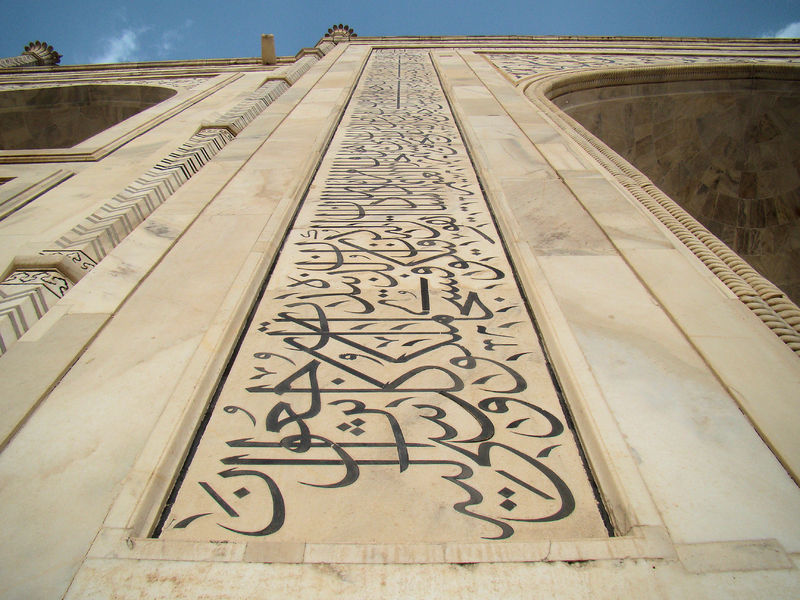 By Bjorn Christian Torrissen [CC BY-SA 3.0 (http://creativecommons.org/licenses/by-sa/3.0) or GFDL (http://www.gnu.org/copyleft/fdl.html)], via Wikimedia Commons
The Taj Mahal always welcomes each of its visitors with an inscription, written in beautiful handwriting, on the great gate that reads "O Soul, thou art at rest. Return to the Lord at peace with Him, and He at peace with you." It was Abdul Haq, who created this in 1609, and was bestowed with the title of 'Amanat Khan' by none other than Emperor Shah Jahan himself. Along with spellbinding architecture and a picturesque background, the calligraphy done is one of the fantabulous ornamental decorations done on the surface of Taj Mahal. The calligraphy of the Taj Mahal mainly consists of the verses and passages from the holy book of Quran. It was done by inlaying jasper in the white marble panels. These passages were inscribed by Amanat Khan in an illegible Thuluth script. A number of the panels also bear his signatures.

Black marble has been used to decorate both the south gateway and the main mausoleum with Arabic inscriptions. The texts chosen refer broadly to the themes of judgment and fruitful paradisiacal rewards for the faithful. The inscriptions over the gateway invite the reader to enter the paradise. And as one enters towards the main mausoleum, the tone of the inscriptions changes from paradisiacal to that of an impending doom that awaits the unbelievers on the Day of Judgment. However, once inside the mausoleum, the tone of the inscriptions changes yet again from judgment to paradisiacal. It is also believed that Amanat Khan even chose the passages for the calligraphy of Taj Mahal, Agra. The exterior of Taj Mahal are loaded with verses from the Quran like:

On the actual tomb of Mumtaz Mahal located in the burial chamber, the ninety names of God can be found as calligraphic inscriptions on the sides, in the crypt including "O Noble, O Magnificent, O Unique, O Eternal, O Glorious..." And the tomb of Shah Jahan bears a calligraphic inscription that reads "He travelled from this world to the banquet hall of eternity on the night of the twenty sixth of the month of Rajab, in the year 1076 Hijri". However, the central focus is provided by passages on the upper cenotaph of Mumtaz Mahal. The words of the Quranic prayer recited by the angels, implore Allah to allow the faithful to enter paradise, a touching request for God's mercy towards His devout servant, Mumtaz Mahal.