Get the feel of real Rajasthan by enjoying camel safari in this tour.
Taj Mahal: Tour Packages: Rajasthan Camel Safari 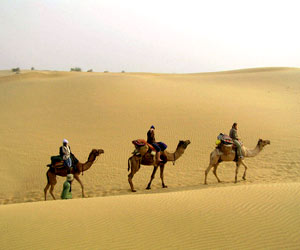 Day 01: Delhi
At your arrival, our representatives will receive you in traditional Indian manner and along with it they'll also help you with customs. Thereafter, you'll be driven to a guest house where you can spend the night and relax.

Day 02: Delhi
In the morning after breakfast, you will be taken on a ride past the Red Fort to Jama Masjid which is one of India's oldest and largest mosques. Next, you'll be driven to Raj Ghat, which is a large garden dedicated in memory of Mahatma Gandhi. This would be followed by a visit to the Birla temple, Bahai Temple, Humayun Tomb & Qutub Minar. In the end, you'll be taken to Akshardham Temple which is built with white marble and red sand stone. You'll be accommodated in a guesthouse for overnight stay.

Day 03: Delhi - Agra
Breakfast will be at hotel after which you'll be driven to the railway station from where you'll board Shatabdi Express to reach Agra. You'll check in to a hotel as soon as you reach Agra. Later after settling the baggage at the hotel you'll be taken to the Taj Mahal, one of the Seven Wonders of the World. Built in white marble by Shah Jahan in the memory of his beloved wife Mumtaj Mahal, the monuments stands as a tribute to eternal love at the bank of river Yamuna. After visiting the Taj you'll be driven to the Red Fort built during the reign of Akbar and soon after it you will be taken to Imtad-Ud-Daula's Tomb, which is the tomb of Emperor Jahangir's father-in-law. You'll check in a hotel for overnight stay.

Day 04: Agra - Fatehpur Sikri - Jaipur
You'll have breakfast at the hotel post which you'll be driven to Jaipur, popularly known as "Pink City of India". On your way to Jaipur, you'll be visiting the Ghost City of Fatehpur Sikri, where you can visit the Jama Masjid, Tomb of Salim Chisti, Panch Mahal and other palaces. Upon arrival, you will be welcomed by our representatives who will accommodate you in a hotel for an overnight stay.

Day 05: Jaipur
After breakfast, you'll visit the Amber Fort. Be prepared to get royally treated for you will be taken to the fort on the back of the elephant. Amber Fort is an architectural delight, the walls and ceilings of which ornate the then contemporary art and engravings. It also consists of buildings such as Diwan-E-Am, Kali Temple and Jai Mandir along with other marble palaces. Then later during the day you'll visit City Palace and Museum, Hawa Mahal and Jantar Mantar built by Jai Singh. Finally, you'll visit Jaipur bazaar then you'll be taken to the hotel for overnight stay.

Day 06: Jaipur - Jaisalmer
Breakfast will be at the hotel, after that you can explore the city on your own. Later in the day, you'll be driven to the railway station to board an overnight train, Jaisalmer Express, to Jaisalmar.

Day 07: Jaisalmer
On arrival to Jaisalmer, you'll be escorted by our representatives to the hotel. The city of Jaisalmer is located at the heart of the Thar Desert. Here you'll explore the yellow sandstone fort and further in the city you can admire the painstakingly latticed Havelis or mansions with great facades. Apart from this, you'll also visit Patwon ki Haveli and Salim Singh ki Haveli, both of which are famous for their architecture and engravings. You'll stay at the hotel for an overnight stay.

Day 08: Jaisalmer Camel Safari
After having breakfast you'll be taken on a four night camel safari which will start from Jaisalmer and cover various hamlets and small cities of Rajasthan. After Jaisalmer, the next halt will be Amarsagar and later Kalah Village where you'll be provided lunch. You can relax for a while, after which you resume the journey, visiting the small but beautiful towns of Manpia and Kuldhara, where you'll be accommodated for the night and will be provided lunch.

Day 09: Jaisalmer Camel Safari
You'll have breakfast at Kuldhara and afterwards will be taken to Padiyari followed by the peaceful village of Waziron ki Dhani, where you'll stop to grab lunch. After having lunch, you'll be taken on a camel ride to open desert where you'll be able to see the actual expanse of the Thar. You'll be staying at a hotel in Haswa in the night. Take delight in the traditional Rajasthani dinner and rest for the night.

Day 10: Jaisalmer Camel Safari
After the breakfast at Haswa, you'll continue your camel safari to Gorera. Next, you'll visit Temderai, where you'll halt to take rest and will be provided lunch. After Temardai proceed towards the nearby hamlet Pithodai, famous for its tranquil atmosphere. Your safari for the day ends at Bhoo, where you'll stay overnight.

Day 11: Jaisalmer Camel Safari
After the breakfast at Bhoo, the camel safari continues and the first stop is Soron ki Dhani, a beautiful and peaceful hamlet. Further you'll be taken to Dhanwa and Talai where you will stop for lunch and relaxation. The next destination is Gali which is a small village. With this, the safari ride too ends. In the afternoon you'll be driven to the railway station from where you'll board a train to Delhi. You'll spend the night overboard.

Day 12: Arrive Delhi
Upon your arrival at Delhi railway station, our representative will receive you. Hence further, you'll be accommodated at a hotel in Delhi where you'll spend the rest of the day, you can relax or can enjoy the indoor recreational activities, or you can even go shopping at nearby markets. You'll stay overnight at the hotel.

Day 13: Delhi - Haridwar - Rishikesh
Early in the morning you will be driven to the railway station from where you'll board on the Shatabdi Express for Haridwar. On arrival at Haridwar, our representative will receive you and then later you will be driven to Rishikesh. At Rishikesh, you'll check in to an ashram. The ashrams in Rishikesh are renowned internationally for philosophical studies, yoga and meditation. Later, you'll be told about the routine for the day at the ashram only. You'll stay overnight in Rishikesh.

Day 14: Rishikesh
A typical day at an ashram at Rishikesh starts early starting with calming and detoxifying meditation classes. Meditation is followed by yoga which is a complete body workout. Afterwards, you'll be provided breakfast. You can explore the ashram during rest of the morning. At afternoon, you'll be provided lunch followed by philosophical lecture by any Indian philosopher. In evening there will be meditation followed by witnessing the aarti of river Ganga. You will stay overnight at Rishikesh.

Day 15: Rishikesh - Haridwar - Delhi
The following day, you will be staying at the Ashram and will be following the same routine of ashram. After the evening philosophical lecture, you will be provided tea and refreshment and driven to the railway station from where you will board on Shatabdi Express for Delhi. Upon arrival at Delhi, you would be transferred to the IGI Airport wherein you can take the flight for your onward destination.