The Secrets of Mutiny takes you back into the history and traces the path of 1857 revolutionaries.
Taj Mahal: Tour Packages: Delhi Agra Tour 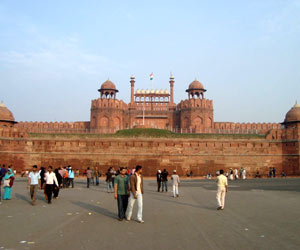 Day 1: Delhi
As you reach the Delhi airport, you will be greeted by our representatives in a traditional Indian manner. Upon reaching the hotel, they would assist you with the formalities, post which you can rest and revitalize yourself from the tiredness of the journey.

Day 2: Delhi
Delhi had once been one of the most splendid cities in the world. Capital of the Moguls, it had been home to great emperors who ruled India from the sandstone and marble splendor of the Red Fort. During the tour you will visit the mutiny sites in Old & New Delhi. First of all you will be visiting the majestic Red Fort, then Chandni Chowk, Jama Masjid and in the end Raj Ghat.

Day 3: Delhi - Kalka - Shimla
Early in the morning you will be driven to the railway station from where you will board a train to Kalka. As you will arrive at Kalka, you will be boarding the famous Shimla Toy Train, which will take you all the way to your next destination, Shimla. Traveling by the toy train is a great experience as the train journey covers 107 tunnels and several arched bridges and the scenery is picturesque. On reaching Shimla, you'll be taken for a stroll on famous Mall Road.

Day 4: Shimla
Day four is reserved for Shimla sight seeing as you visit a number of popular tourist spots such as the Rashtrapati Niwas which was formerly the residence of the British Viceroy, the State Museum which has a modest collection of statues from different parts of Himachal Pradesh, Jakhu Temple, dedicated to Lord Hanuman (Monkey God), Summer Hill, Prospects Hill and Wildflower Hall. Along with these popular destinations, you will be taken to the hill station Kufri, which is a well - known ski resort in Himachal Pradesh situated 16 kms away from Shimla.

Day 6: Kolkata
You will be visiting various monuments and other interesting places throughout the day. The list of places to visit includes the Victoria Memorial - a grand edifice constructed in the memory of Queen Victoria, Howrah Bridge - a major landmark of the City of Joy, Birla Planetarium - the second largest planetarium in Asia Planetarium. St. Paul's Cathedral, National Library, Shaheed Minar, Fort William, Rat Park and Marble Palace are few other interesting spots that attract attention of all.

Day 7: Kolkata - Lucknow
You will leave for the airport early in the morning as you will be boarding a flight to Lucknow. As soon as you reach Lucknow, you will be driven to the Mutiny site of Lucknow. If Delhi was the symbolic centre of Mutiny, and if Cawnpore (Kanpur) provided its most horrific episode, it was Lucknow that caught the imagination of the British public and and became, perhaps, the most well-known destination of all Britain's 19th century wars. You will be accommodated at a hotel for overnight stay.

Day 8: Lucknow
After the breakfast you will be visiting Immambara, which is one of the most magnificent and grandest buildings of Lucknow. There is a legend about Immambara that at Imambara, there is a tunnel a mile long which opens at Faizabad, which once was the seat of power of nawabs. After Imambara, you will visit the famous Ittar (perfume) Market of Lucknow where you will be demonstrated how the traditional Ittar is prepared.

Day 9: Lucknow - Kanpur
After breakfast you will be driven to Kanpur, which is one of the other major tourist attractions of Uttar Pradesh, after Lucknow. As you reach Kanpur, you will be received by our representative who will help you check-in to a hotel. After relaxing at the hotel for a while you will be visiting a few important mutiny sights of Kanpur.

Day 10: Kanpur - Jhansi - Orcha
You will be provided breakfast at the hotel after which you will leave for the railway station, from where you can catch a train to Jhansi. As you reach Jhansi our representative will receive you and arrange for you a drive to Orcha. After reaching Orcha, you will check in to a hotel where you will stay for the night.

Day 11: Orcha - Jhansi - Gwalior
Post breakfast at the hotel, you will be taken on a sightseeing tour of Orcha. You will be visiting famous temples of Orcha where you can have a closer idea of Rajput Hindu traditions. The baffling architecture and pleasing design of the temples are sure to capture your imagination like never before. Later during the day, you will visit the Fort at Orcha, which once was the hub of all mutiny activities. Lastly, you will be driven to Gwalior via Jhansi, where you will be accommodated at a hotel for an overnight stay.

Day 12: Gwalior - Agra
In the morning after breakfast you will be visiting the Gwalior Fort, which once used to be the throne of every dynasty. After the guided tour of Gwalior Fort, you will be taken on a road trip to Agra the City of Taj. Mark Twain once said, "When this soaring bubble of marble breaks upon your view you for sure can not keep your emotions within bounds." As soon as you reach Agra, you will be checked in to a hotel where you stay overnight.

Day 13: Agra
After breakfast, you will be visiting Taj Mahal - the astonishing and mesmerizing man-made wonder. Built by Shah Jahan in memory of his beloved wife Mumtaj Mahal, Taj Mahal till date stands as a symbol of eternal love. It took 20000 workers and craftsman 22 years to erect this man-made wonder. Further during the day you will visit the majestic strong and magnificent Red Fort which was built by three generation of Mughals. At the end of the day, you will return to the hotel for overnight stay.

Day 14: Agra - Delhi
After a traditional breakfast at the hotel you will depart for Delhi. As soon as you reach Delhi, you will be received by our representative who will escort you to the hotel where you can check in and relax. Further the day is at your disposal, you can visit the local markets and buy souvenirs or can rest for the entire day or enjoy the indoor activities offered by the hotel.

Day 15: Delhi
In the morning after breakfast you will be driven to the international airport from where you will board flight to your respective destinations.