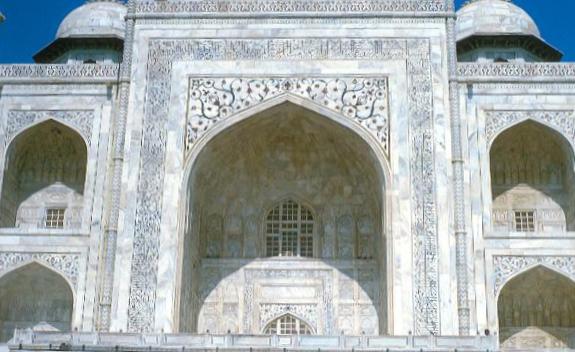 Referred to as Darwaza-i-Rauza or "gate of the mausoleum" by the architect Ustad Ahmad Lahauri himself, the main gateway to Taj Mahal is indeed a worthy counterpart to the mausoleum in every sense of the phrase. No doubt that Taj looks splendid when seen from distance, but it's the child-like enthusiasm to adore it from touching distance that takes the anticipations to an all new level. And just when one reaches the open square before the main gateway, the majestic view of Taj disappears completely, only to manifest itself in an altogether glorious way when one stands right in the doorway itself, the doorway to the main mausoleum. The concept of Taj emerging out of the shadows and slowly growing on you seems even more praiseworthy if one dives into the abstract interpretation that suggests a transition from the outer physical world to the inner spiritual world.

The main gateway of the Taj Mahal is one of the five main elements of this magnificent monument. Adorned with Hindu motifs, the Taj gateway is a tall niche doorway in the shape of an ogival arch that rises till the mid-height of the structure. With a vertical symmetry, the main gateway of Taj Mahal stands bordered with Arabic calligraphy of verses from the Quran, made up of black stone. An optical illusion is brilliantly at play here as the size of the letters has been increased in such a way that it all seems consistent all over the arch from top to bottom. It was done by gradually increasing the size of the letters in a pre-calculated manner as their distance from the eye increased. Also, part of this gateway are octagonal towers that stand on the corners and are surmounted with broad and open domed kiosks and a heavy door made up of eight different metals at the base that are adorned with knobs.

Further beautifying the gateway to the Taj is an image of a white teardrop with a red trident, located above the pointed tip of the niche. When the gateway was under construction, this frontal gateway served as the main entrance. All these motifs of the gateway reflect a Hindu touch. Entwined flowers, mainly red lotus ones, leaves and vines ornament the sloping sides of the niche. These motifs were formed by semi-precious stones inlaid in the marble. And within the archway of this main gateway is a huge chamber with an arched roof decoration. The experts haven't been able to unlock the mystery of the countless rooms that lay inside it which have twisting and branching and side branching hallways that were seemingly built to confuse its entrants but have been unused for three centuries. Most of all, it's the stunning view of Taj from inside the main gateway that remains etched in viewers' memories long after the show is over.