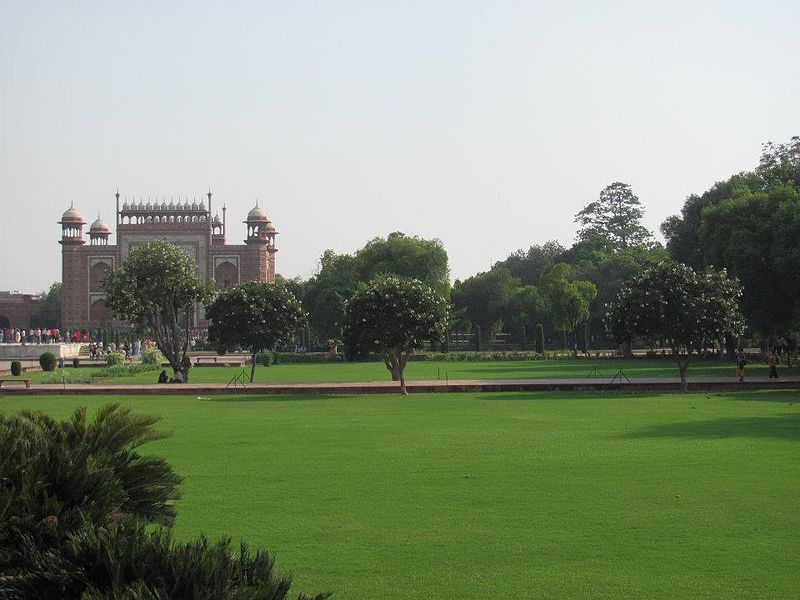 The garden that starts from the end of the main gateway and ends near the squared base of the mausoleum is an integral part of the Taj Mahal structure and is, undeniably, one of the major highlights of the visit for many. The garden that beautifies Taj comes from the Persian Timurid style of gardens, and is based on the concept of paradise garden' and was brought in by Babur. This garden, filled with flowers, fruits, birds, leaves, symmetry, and delicacy, served many functions along with portraying strong symbolic or abstract meanings about paradise. A paradise which, according to Islamic beliefs, consists of four rivers: one of water, one of milk, one of honey, and one of wine. And it is from this concept that Char Bagh of Taj Mahal originated. Also, the symbolism of the garden and its division are noted in the Islamic texts that describe paradise as a garden filled with abundant trees, flowers, and plants.

Out of the total area of 580 meter by 300 meter of the Taj complex, these gardens alone cover an area of 300 meter by 300 meter distance and are based on geometric arrangements of nature. No attempt was made to give them a "natural" look. Another architectural attribute that has been followed in the case of the entire monument, especially the gardens of the Taj Mahal of Agra, is the usage of number four and its multiples. Since four is considered the holiest number in Islam, all the arrangements of Charbagh Garden of Taj Mahal are based on four or its multiples. The entire garden is divided into four parts, with two marble canals studded with fountains crossing in the center. In each quarter portion, there are 16 flowerbeds that have been divided by stone-paved raised pathways. It is said that even each of the flowerbed was planted with 400 plants.

The trees of the Taj garden are either that of Cyprus (signifying death) or of the fruit bearing type (signifying life) and even they are arranged in a symmetrical pattern. Taj Mahal occupies the north-end corner of the garden, instead of being in the center. In fact, at the center of the garden, between the Taj and its gateway, is a raised marble lotus-tank with a cusped border, which reflects the Taj in its waters. The four walkways that are although identical are differentiated through their context. In fact, the symmetry with which the whole garden has been organized and laid out, can be clearly observed and experienced as one can get an unhindered view of the mausoleum from any spot. These aesthetically maintained gardens not only bring a natural sense to the proceedings, but also make for some great snap taking spots.