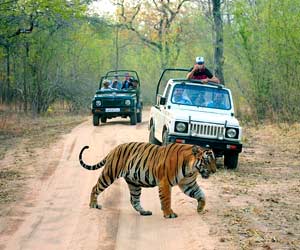 Day 1: Delhi - Corbett
From Delhi the capital of India, the first travel destination will be Corbett National Park. As you will reach Corbett, our representative will receive you and will help you check-in to a jungle lodge. After lunch, you will be taken on a jungle safari on an elephant back during which you will be accompanied by an expert naturalist. Evening awaits you with bonfire and barbeque. You will be staying at the lodge overnight.

Day 2: Corbett
After an early breakfast at the lodge you will be visiting the park in closed jeeps or elephant back, to see a variety of wildlife and if you are lucky you may be able to spot a tiger. At evening, you can relax at the poolside or you can also leisure at the river bank or you can even watch a tiger film which is organized by the resort. You will be spending the night at the lodge.

Day 3: Corbett - Agra
This morning too is reserved for an early morning safari of the park. Later after the safari you will be driven to Agra. As soon as you reach, you will be checked-in to a hotel, where after relaxing for a while, you will be taken on a sightseeing tour of Agra. The sightseeing tour includes a visit to Agra Fort a manmade wonder, after which you will visit the Taj Mahal which is a tomb built by Shah Jahan in memory of his beloved wife Mumtaj Mahal. Taj, till date, standing at the bank of river Yamuna, is a symbol of eternal and unconditional love. Relish every detailed and miniscule design of the immaculate Taj. After the visit to Taj you will be taken back to the hotel.

Day 7: Kanha
The day will start with a breakfast at the camping area after which you will be driven to the national park. At the park, you will spend time on a Machan, an elevated platform situated usually on a tree. From the Machan, which are set near waterholes, you can witness activities of the wild animals in the jungle. After spending some time at the Machan, you will be brought back to the camp where you will be spending the night.

Day 8: Kanha - Kawardha
This will be your last day at Kanha and after an early morning jungle drive you will proceed towards Kawardha. As you reach Kawardha, you will be checked-in to a palace Kawardha, which has been recently opened to visitors by the Maharaja. This is the reason of its delightfully quiet and unspoiled surroundings and palace circuits. On surrounding forests of Kawardha lives the Baiga Tribe and visiting their settlement is an exotic experience. You will be spending time at the palace overnight.

Day 9: Kawardha - Raipur - Delhi
After having a grand breakfast at the palace you have the entire morning at your discern. You can either explore the palace or you can go shopping souvenirs at the local market. Your evening is reserved for having a conversation with the Royal Family. Later, you will be driven to Raipur to catch a flight to Delhi. As you reach Delhi airport, you would be taken to the domestic/ international terminal from where you can carry on with your onward destination.